Every day is a Holiday! 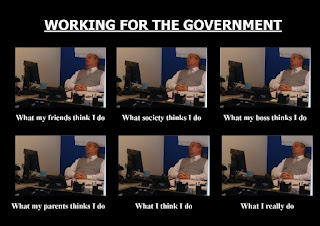 Our Homie ministry wants a two-day holiday for them sarkari offices except for them Khanepaani, batti, phone wallahs and other so-called essential service providers. Whoever came up with the ‘Load Shedding Reduction Work Plan’ must really hate Sundays.  The so-called planners think we could save some energy if our sarkari lazy bums got another day off to play a card game of marriage with other freeloaders.

Our public servants have it easy in this great land of ours. Every day is a holiday for our incompetent nincompoops. They get to work late around 11am, read newspapers and drink their tea while the service seekers are made to wait in line for hours.

I hope them so-called unions in these water, batti, phone corporations will unite and gherao the Home Ministry to protest such discrimination kya!  After all, them so-called essential service providers also need a day off to get over their hangover ni.  We are not getting 24 hours electricity, paani and reliable mobile service… so it really doesn’t make any difference if them corporations are open on Sundays!

Somebody needs to remind our government that we buy paani from private tankers and we  really don’t expect much from the Khanepaani folks! In this great capital of ours, waiting for water from the khanepaani wallahs is like waiting for Godot.  Yes, someday we will get the paani from Melamchi but until then we will have the dhungey dharas and the private tankers.

One day, they too will run out of water and maybe then we will finally have no choice but to go for rainwater harvesting. Maybe, our National Planning Commission wallahs can come up with a plan or two. How about providing subsidies for all of us to construct them rainwater harvesting systems?

Every winter, we have more than 12 hours of load shedding and in the next few years, we should not be surprised if we have no power at all during the whole winter. We are still waiting for our comrades to fulfill their promise of giving us 10,000 MW of power within a decade. We should have gotten at least 4,000 MW by now.

Our Emperor should ask the Hong Kong-based NGO to invest in a hydropower project rather than trying to come up with silly plans for the Disney-fication of Lumbini!  Let us first try to relocate them cement factories from the Bhairahawa-Lumbini corridor for a change and then maybe we can come up with a master plan.

Haku Kale could pitch his ideas… he seems to have more brain cells than our stupid netas.  And who cares, if he is just another fictional character… so is the Chinese NGO that has promised to invest US$ 3 billion in Lumbini!

In the next few years, we will all have to opt for solar energy and get off the national grid.  Of course, them solar panels don’t come cheap. Them Chinese are like the world’s largest solar panel manufacturers … maybe our caretaker government can ask the Chinese to give us a few million solar panels at subsidized rates.

The Chinese can call it a ‘Tihar Discount’ and if all goes well, then we won’t have to worry about missing out on them Desi TV serials this winter.

Nepal Telecom is minting money like crazy even though they really don’t care about providing a reliable service to its customers. I guess the  hakim sahebs have never heard about ‘customer service’ and think that all customers are suckers.

I think we should have some kind of an exchange program between our sarkari and the private sector. And maybe, they will at least realize how much they have been slacking off.

We can send our police wallahs to work as security guards for them banks for a month and vice versa. The bank guard will probably do a body search on every Ram, Laxman and Hanuman who enters the police station while the men in blue won’t even notice a bank robbery taking place in front of him.

We can ask our NT folks to go work in Ncell or some of them private telecom wallahs. The Ncell folks will probably clean the sarkari office first and get right to work while the NT wallahs will first try to figure out where the daily newspapers are and who serves them doodh chiya!

Our CDO sahebs should go work for some private entity as well. Somebody needs to remind them they are not the mini Maharaja of a district. Well, the only ones who really scare them are our Madhesi netas who think they deserve a nice vehicle and guards and what not whenever they come to their home district for a visit.

As usual, our public servants will get to enjoy while the public hopes for a better day! Yestai ho Nepal ma…. the incompetent fools run the show while the competent ones just bitch and complain all the time.