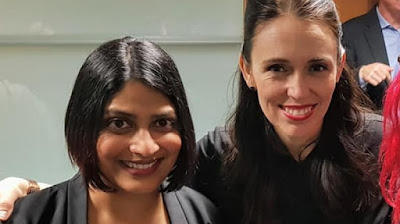 I think I will move to New Zealand (I like social democrats and progressive wallahs!)... will still enjoy the earthquakes there and my kids can play 'The Lord of the Rings' all afternoon.. but at least the Kiwis are getting the right people (women) in power! Priyanca Radhakrishnan bahini "has spent her work life advocating on behalf of people whose voices are often unheard – women survivors of domestic violence, and migrant workers who have been exploited."

Priyanca Radhakrishnan becomes New Zealand’s first Indian-origin minister! Hope someday we will have a first Nepali-origin minister somewhere other than in Nepal because so far we have had Bidya Didi, Sujata Auntie and the energy minister-ni etiyaadi,.. Pri bahini is only 41 and the NZ Prime Minister is only 40! Go figure...
And we have to deal with our 'corrupt' budas while Amrika is dealing with grandpas..... Merry (Early) Xmas! I think it's time the world sets some kind of an age limit for those who will lead.... I think our thulo mancheys in the kurchis should be under 60! After 60, they can play with their grandkids not mess the lives of all other grandkids out there.!
Posted by Guffadi at 11/03/2020 03:42:00 AM No comments: 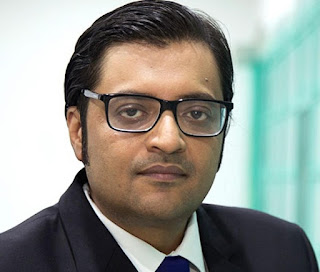 First of all, please do understand that you have to respect others to gain respect for yourself. We, the Nepali people do not hate India and we are not siding with the Chinese to piss you off.  The only thing we have common with the Chinese is the Momos.

China only cares about Tibet when it comes to its border issues with us and they do not want Tibetan folks protesting in front of the Chinese Embassy. No wonder, our politicians and civil servants get pocket money from them to keep the Tibetans under control. We were the first ones to welcome Tibetan refugees in this country. His Holiness Dalai Lama may have fled to India but thousands of refugees came to Nepal and they continue to live here with us peacefully.

I live in a neighborhood where I see only rich Tibetans living in houses worth Crores and driving around in luxury vehicles. How many Tibetans in India are allowed to open businesses and become more successful than the average Indians.  I do not envy them. I am proud that they have become rich in our land by selling carpets to the West.

I am not angry that they have earned millions of dollars and are living the good life. They worked hard and they were able to sell their products. I salute them.

Hundreds of thousands of Indians live and work in Nepal and so do our Nepali brothers in India. The only difference is that we do not make fun of them in our movies like you do to ours. We love Bollywood movies. But we are not happy when Nepalis are portrayed as watchmen. 'Bahadur' actually means 'Brave' but you folks have made it something else.

Do you know that thousands of Nepalis have died fighting for your country? How many Indians have sacrificed their lives defending ours? Your media always talks highly of the men and women serving in your armed forces.

Do you know hundreds of thousands of Nepalis have served your country and died so that your parents and you can live in peace. Do not forget that Nepali blood has been spilled protecting your land.

Arnab, your father was an army man. You should know better. Our brothers have fought for India against the Chinese and the Pakistanis. Do not forget Kargil. How many Nepalis serving in the Indian Army died in Kargil and your other wars? We are Bir Gorkhalis and you should appreciate our men for sacrificing their lives to fight against your so-called enemies.

Our politicians are arseholes but they are our arseholes. They are corrupt, useless and lack morality but we voted for them and we have to pay the price.

But we stand by our crooked politicians when it comes to our sovereignty.  Yes, the border issue is not a simple stuff. Both governments need to sit down, drink some chai and work it out. You and a bunch of your so-called media wallahs think India should go to war with Nepal. Who are you going to send to invade Nepal? Our own brothers?

Your Army Chief should not be commenting on political issues.  Indian Army chiefs have always admired and respected the Gurkhas. This  Army Chief must be different. Both armies have had good relationships over the years and I guess your Army Chief wants to break off that relationship as well.

India calls itself the big brother in our neighborhood. Act like a big  brother and not a big bully. Please remember that before 1947, there was no India. It was different kingdoms and the British had fun with them. Yes, our ancestors fought against the British and lost or else we would have Dehradun and more as our land.  Yes, the British gave back some land after we became friends.

Now, let us come back to our relationship. We have an open border. We go to India to work and so do the Indians who come here. My neighborhood barber is from Bihar. He has been living here for the past thirty years. We call him ‘Mithun’ even though he doesn’t look anything like Mithun Da, my favorite movie star when I was a kid.

My late father used to go to Mithun's barbershop for his hair cut. I go there too and my kids are his new customers now. We are proud of Mithun. He has worked here and provided for his family. His daughter will be a doctor soon. At the end of the day, we all want to work hard wherever we are to provide for our family.

During the so-called Indian blockade of 2015, we suffered for more than six months because we buy billions of dollars worth of goods from India and when most of the border points are closed, we save some money but we have difficulty in getting cooking gas and other daily essentials.

How can India be so cruel if it claims that we have a ‘beti roti’ relationship? Do you cut off your own little brother and still claim to be a good human being? . I gave some money to Mithun during the blockade. He has not yet repaid it back but I have not asked for it either.

I treat him as a brother, not some guy from across the border who is here to take our jobs or make money from me. Yes, Indians send home US$ 3 billion from Nepal as they work here and many Nepalis do the same to theirs as they work in India. We are lucky that we both can visit each other without visa and it's just a few hours flight. I will come to Mumbai for coffee, Arnab. You don't have to wear a helmet. We are brave warriors but we do not fight for petty stuff like you do.

Even during the blockade, we never blamed Mithun or other Indian laborers who live in our neighborhood. We knew that it was a political issue and we should not take it personal and vent our anger against the common Indian folks. But a minor border issue crops up and you want your fellow citizens to go all out against ours. Where does all this hate come from, Arnab? Take a chill pill, brother! please.

Those of us who can afford to, go to India for medical treatment. I took my father to Medanta when he suffered from cancer. We were amazed by the treatment and the infrastructure there. We spent lakhs of Rupees for my father’s treatment. It is sad that our government has not built good hospitals to take care of its citizens. Our politicians go to foreign lands for medical treatment at our taxpayers’ expense.

If India wants to help then help us to set up world-class hospitals, educational institutions as good as the IITs and IIMs. Help us to be self-sufficient in agriculture by providing technical skills and knowledge. But no, the Indian government and its Embassy here only helps our politicians.

Yes, during your independence day celebration, your Embassy hands out ambulances and school buses. But remember, it is our politicians and civil servants who like your free lunch. We, the Nepali people are not beggars .We are hardworking people and we know how to take care of ourselves even with no help from our government.

Arnab, you may think you are a great journalist but you just want to be like one of those white folks on Fox News. You are a racist, right-wing pig. So is Modi Uncle , a Desi Trump?

When Modi visited Nepal for the first time, we were happy. We applauded and gave him more love and respect than we have ever given to our good for nothing politicians. But then he showed us his love by closing down the borders in 2015. The Indian government claims that it was our Madhesi political parties that blocked the borders but we all know how powerful the Indian government is. A phone call from the Indian Ambassador in Nepal is enough to make our politicians piss their pants.

So, Arnab, tell Modi to do the right thing. The border issues can be resolved by sitting down for talks and not by media wallahs like you.  We do not hate Indians. Most of my friends, my sisters and my ex-girlfriends went to schools in India. Some of us have businesses there while thousands of Marwari families have businesses here as well.

But people like you know nothing but to brew hatred among us. Stop doing that. Another of fellow so-called TV journalist went on a rant against Manisha Koirala. Leaver her alone.  She went to Bollywood and became a star because of her own talent. You did not make her a star. The common Indian folks did. She is not speaking for China because we are our own people.

Please do remember that we were never colonized and we have been an independent nation for the past two hundred and more years. Indian became a nation in 1947. India is our big brother and we want India to respect us as a brother. We may be a small nation but we are a proud nation.

We are not China’s stooge. Learn a thing or two from China as well. China has invested more in infrastructure than India. That’s why you don’t see animals, stray dogs and beggars running around the streets.  India is probably fifty years behind China when it comes to that and we may be fifty years behind India as well.

But it is not our fault. Our governments have failed us. Your government is doing its best to deal with the COVID-19 crisis and has announced thousands of Crores in relief packages but our government has not done much even though it’s been two months since we have had our lockdown.

We wish the Indians well. We wish India well and Arnab, spread the love and not hate through your talk show. We wish you well as well.

And one more thing Arnab. Give some respect to your own fellow citizens. The media can help to raise awareness and spread the love. The folks in the Northeast are not Nepalis, Chinese or COVID-19 carriers. They are every bit Indian like you. You were born in Assam. You should know better. Treat your own citizens with respect first before you talk about us.

Arnab, you can send me an email at maguffadi@gmail.com if you want to bark back. Thanks. Long Live the Goswami clan. Your ancestors must be really proud of you!