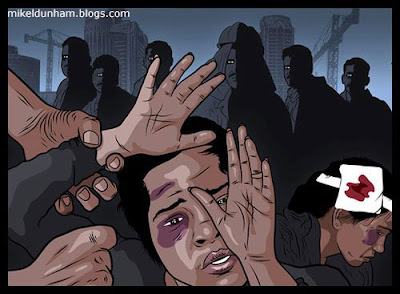 Our caretaker government is not interested to get all them hawa-taari parties to come together and resolve them so-called disputes. Dr. Saheb promised us that we would have another CA election natak on November 22. But our Election Commission wallahs now tell us that it's not possible and the best tyam to hold them elections chahi around April rey!

I think so too.... the weather is nice and not much dhulo mulo.... April is the perfect tyam to eat suntala and badaam and then maybe head to the voting booth and cast your vote sote. I think we should just go ahead and get the 30+ taukeys of them political parties to form a committee or something and work on this so called 'new constitution' natak!

After all, the other 571 folks didn't have anything to do with four years of natak kyaaruh! They just got paid and had fun attending seminars and what not... as CA members. We have to thank the Scandinavians for spending millions of dollars to show our CA members how the Vikings built them big-arse boats.

And now, our stupid government has come up with another nautaki rule sule for our women who go to them Gulf countries for kaam saam! If you are a Nepali woman and you want to work in them Gulf countries then you have to be at least 30 years old rey.

Why? Because they are more mature and won't be sexually exploited by them Arabs rey. It doesn't matter if you are 20 or 30 or 40.... domestic workers are not protected by them labor laws in the Gulf region! So it doesn't really matter how old you are .... you can't complain about your pay and working conditions if you are a domestic worker in them lands. And you can't change jobs and you are at the mercy of your employers!

Hundreds of Nepali women have committed suicide in the past few years. Our government doesn't care. Our sarkari hakims tell us that only 56,000 women are working in the Gulf region. The UN ko figure chahi .... around 244,000! We have like 200,000 women who are working illegally and we don't know if they are doing okay or if they are in prisons.

In 1998, our government banned Nepali women from going to the Gulf countries. I guess our manpower agencies paid crores to lift the ban hola. We have to thank our 'Republic' government for lifting the ban in December 2010!

Many manpower agents send our women via India. I think the UAE and Qatar is okay for our women. But the government should only allow women to go to them Gulf countries if they find jobs with multinational companies kya. Many women are working in them five-star hotels and banks and other really good companies!

But let us not send our women from the villages to the Gulf countries ... because most of them are sexually exploited, beaten, tortured and even killed by their @#$!ing employers.

I do not support the death penalty but yo manpower agents haroo lai chahi jhoon-dau-nai parcha! Every year, half a million folks leave the country... mostly to them Gulf countries and Malaysia. Most of them are underpaid, overworked and physically assaulted by their so-called 'Desi' supervisors kyaaruh!

Mero didi ko baccha haroo ko nanny ko boyfriend is now in Saudi Arabia. I told him not to go. I even offered to invest some dough so that he could open a vyar vyar momo stall. He makes good momos! He was a lucky guy too. He won 1 laakh .. tyo Coke ko SMS natak ma .. a few years ago! Naw-Jau hai kaaancha bhaneko.... khoi moro hidi-halyo!

And now, it's been a year and half... and he hasn't gotten paid for the past 9 months and he is still working for the same asshole! He can't change jobs ... because then he would be an illegal alien rey.

He has six more months to go and then he will probably come back. He spent like 82,000 to get to Saudi Arabia. He hasn't saved a penny yet... and when he comes back... he will have enough to buy an Indian cycle hola! Khoi.. kinuh jaaney ho tyesto desh ma?

Some of my friends work in Dubai. They are doing pretty good but of course they have skills. Koi hotel ko manager, koi security chief, koi bank sank ma! But most of our folks don't have them skills. I think we should have them 'Arabic' tests like the Korean ones. Baroo... officially nai pathau sabai daju bhai didi bahini haroo lai.

Our manpower agencies make like.... 3,000 crores... more than 300 milion Amriki dollars a year... from our villagers... who want to go to them Gulf countries even when they have heard them crazy stories. Ek choti lai bhaye pani bidesh jaaney kya... bhanchan rey!

We can't stop our folks from leaving .. because only them netas, their chamchas , civil servants and contractors are having fun in this land of ours. Of course we are here too.... but most of us have been fortunate that our parents have 6 anna ko jaaga in Kathmandu and dui-talla ghar.. so we don't have to worry about rent sent etiyaadi!

Hoonay-khaaney wallahs will not be going to them Gulf countries soon... most of them want to migrate to Canada ... hehe! Yaarey ho.. Canada naw-jau... Amrika ma tuh at least you can buy a car even if you work in a car-wash haha! Canada ma kaam pau-nuh gaaro cha!

My cousin and his wife have already spent like 1.4 lakhs .. with some agency ... to move to Canada. He has a pretty cool job here. He makes like Rs 42,000 a month working for a business house! His wife is teaching them undergraduate students kyaaruh... she makes like 19,000 a month. Abuh kay chai-hiyo bhanya!

Why the @#$! do you want to move to Canada when you are doing okay ... aafnai desh ma! I told him.. 'your Nepali MBA is not going to get you a job with some investment bank in Canada'. Your wife is not going to make 5,000 dollars a month and no, she won't get to teach at them colleges.

If you are really starting from scratch then... you should go .... if not .. then.. stay here.. and bhaako bajeko sampati lai jo-gau hehe!

Anyway, let's get back to the story. It's about time... our women activists kick some arse. We should not allow our manpower agencies to make billions by sending our sisters to them hell-holes! Them agencies give our netas crores every year and our hakim sahebs and them sarkari clowns at our only international airport and even the policewallahs get their cut when our folks are sent to them Gulf countries kyaaruh!

We have to stop this... Where is Saathi, ki Maiti Nepal ki I don't know... Help Nepal nai? Arzoo Deuba, Bandana Rana... stop acting like you are working for them women at risk... jpt kya!

Maiti Nepal should be allowed to place their staff at the airport pani. Plane ko dhoka ko cheu ma basnoo parcha... or else our women will continue to suffer kya.

At least if you can speak the language... you can get some help if you are lost or if you are in trouble! Malai tuh tyesto laagcha hai. It's sad hagi... our men and women are suffering in the Middle East.. and look at our netas, civil servants and them manpower agency haroo ka sahujis with their ek karod ko gaadis and what not... @#$!ing cockroaches!