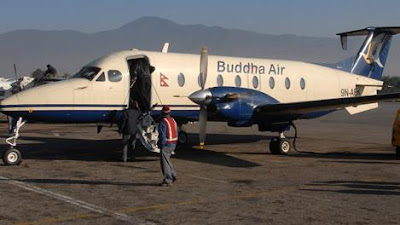 Every year, our planes and helicopters crash here and there and our media wallahs and even them government agencies blame them pilots for all them crashes. Today, Buddha Air suffered its first ever air crash in its history and our love and prayers for the victims and their families.

Flying a plane slane is not as easy as driving a micro-bus ni. When it comes to them buses and trucks, the khalasis get promoted to drivers after a year or two of driving while the driver saheb takes a nap after a lunch break. But we don't have a Khalasi for them planes so if you really want to fly a plane then you have to spend 20-30 lakhs and take them classes and what not.

Then you come back and apply for them jobs and if you are lucky then you get hired by our domestic airlines and it would take your more than 3-4 years before you become a captain kya.

And yes, we are all human beings.. we do make mistakes but them crashes were due to them bad weather conditions rather than human error kya.

The monsoon season was supposed to end a month ago but I guess... yes paali chahi October samma nai paani parcha jasto cha. I think it's about tyam, our private airlines operators cancel all them flights during the monsoon season except for emergency stuff kya.

We can't expect our government and them civil aviation folks to do anything about it because they really don't care. Nepal Airlines will no longer exist by 2020. And for our business wallahs, it's really tough because they have invested millions of dollars in buying them planes and helicopters and when tourist season comes, they want to make a few dollars more by flying around even when them weather conditions are not favorable kya.

Buddha is probably the safest airlines in Nepal. They don't fly to remote areas except them mountain flights and them other routes chahi mostly urban areas in Nepal.

We are Nepalese, we are always cooking up them conspiracy theories and waste our tyam guffa-maaring. I was at the local chiya pasal and one of the local jackass was telling his friends, 'Don't fly them plane slane if they have a women co-pilot because the last 3-4 crashes ma there was a lady pilot rey'

C'mon arsehole... this ain't Saudi Arabia. Well, the Saudis have finally decided to let their women vote in the municipal elections but what difference does it make if a lady is flying the plane or not? They went to the same flying schools and graduated because they were competent and they have to compete with them 'males' when they come back and apply for them jobs.

Flying is much safer than taking a micro or them night buses when you travel outside the valley and most of the folks who tell me that they are never to going to get on an airplane are the same people who have never flown on a plane.

But if you are really worried then don't fly during them monsoon season. I don't know why them civil aviation employees allowed them planes to fly .... it's been raining since the past few days and even our highway sighway haroo ko bato sabai khattam cha... so if we should blame somebody then it's our incompetent airport wallahs and the management wallahs of them private airlines ni.

Let us not blame our pilots for they are courageous enough to fly under such adverse conditions but it's about tyam our pilots union did something about this kya.